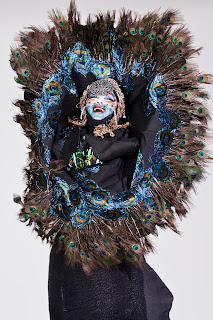 Daniel Lismore is an inimitable figure in London’s fashion scene.  His outfits tell the story of his life. Inspired every day by London as the cultural capital of the world, Lismore styles 365 looks a year, creating outfits from found objects, haute couture, car parts, cultural artefacts, museum pieces and recycled goods.  He has worked with some of the greatest names in fashion and influenced numerous designers. Described as “London’s most outrageous dresser” by American Vogue, Lismore’s looks have been exhibited at Tate Modern and Tate Britain.

Lismore’s outfits reflect his outlook.  “I get a bit bored being human sometimes.   You’ve got to be and live exactly how you want to be.  Just bloody do it.”. Recycling is an important part of Lismore’s ethos. “I’ve found some of my best looks on the street. I don’t see objects as what they are: I see them as what they could be”.

Daniel Lismore studied photography and fashion design at college, which was interrupted by a modelling career at age 17. Since moving to London, he has been photographed by Mario Testino, Phil Poynter, Mert & Marcos and Ellen von Unwerth, featured in magazines such as British Vogue, L'Uomo Vogue and ID. He progressed in the publishing world, illuminating the wardrobes at magazines such as Vogue Russia, POP and Vogue Nippon.

Lismore is also renowned as a stylist. He has frequently collaborated with international celebrities on music videos and red carpet events. His image has been the inspiration behind many fashion designers’ collections and pop stars’ artwork imagery.  In 2012 Lismore co-founded luxury womenswear label SORAPOL, merging artisanal techniques with subversive silhouettes to form idiosyncratic couture, and in 2015 Lismore joined high street makeup brand Illamasqua as a consultant, working on creative concepts and brand development, and recently became the face of H&M's Close the Loop campaign to promote recycling. The campaign ran worldwide with Daniel’s face in every H&M window from London's Oxford Street to New York’s Times Square.

Lismore has made use of his recognition. “I’m quite shy, but I feel like I’ve become a warrior, using my outfits as armour: it amplifies the impression I make, which people respond to. People stare at me anyway, and it’s good to give them something to look at.”  In 2014, Lismore became a patron of Graduate Fashion Week, where his work has taken him to support young designers, presented at the Houses of Parliament.  In recent years, he has used his influence to help causes such as Vivienne Westwood's Climate Revolution, climate change charity Cool Earth and NWI Kenya. He has been involved with supporting the LGBT community, human rights issues and free speech movements.

“I think it’s important to look good, smell good and sound good, which always make me feel good. I don’t feel like my look is finished without these elements.”