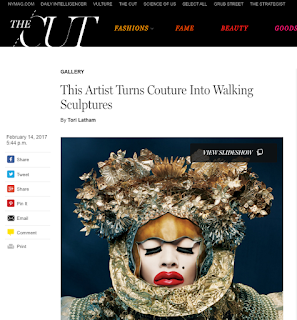 
Thirty-two-year-old London-based artist Daniel Lismore calls his artwork “fabric monsters” — he designs over-the-top outfits that he wears on a day-to-day basis. Recently featured at the SCAD FASH Museum of Fashion + Film in Atlanta*, Lismore uses a mix of couture and designer pieces (Yves Saint Laurent and Alexander McQueen are two of his favorite brands), clothing he stitched himself, and objects he picked up on travels around the world. The new book Daniel Lismore: Be Yourself, Everyone Else is Already Taken, out February 14 from Skira Rizzoli, showcases his most extravagant designs.
“What I really want people to understand is that I do exist like this,” Lismore said about the clothing shown in the book. “I spend my life like this. It’s okay to be whoever you want to be.” For both the exhibit and the book, Lismore chose 32 looks of about 4,000 pieces he created and kept in storage. The collection includes intricately beaded gowns, Victorianesque headpieces that resemble miniature ships and birds’ nests, and Andy Warhol–inspired graphic prints. Lismore said he dresses conservatively, covers his hair with a hijab or scarf, and wears gloves underneath his pieces, allowing him to “paint with fabric.” Click ahead to preview the book, featuring images by photographer Colin Douglas Gray.
*The original version of this article mistakenly referred to the SCAD FASH Museum of Fashion + Film as the SCAD Museum of Art.