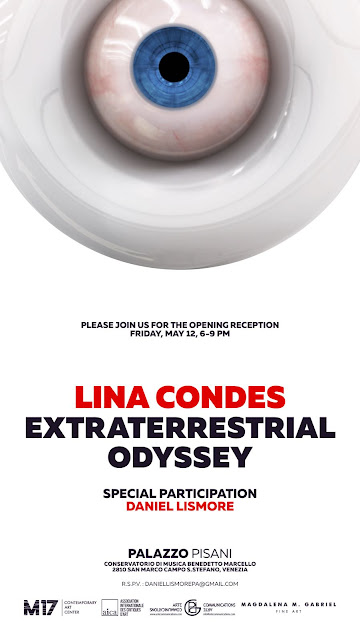 Curators: Paolo De Grandis, Tamara Li, Magdalena Gabriel
Organiser: M17 Contemporary Art Center
Co-ordinator in Venice: Carlotta Scarpa, PDG Arte Comunications
Inauguration: Friday 12th May at 6.30 pm
Venue: Palazzo Pisani - Conservatorio Benedetto Marcello, Campo S. Stefano, San Marco 2810
Open to the public: 13/05 – 26/11/2017 Opening hours: 10.00 – 6.00 pm– Closed on Sundays
\VENICE PRESS RELEASE
On the occasion of the 57th International Art Exhibition – La Biennale di Venezia, M17 Contemporary Art Center presents Extraterrestrial Odyssey exhibition featuring Conde’s new piece ‘Sphinx’ as well as two new sculptures by Daniel Lismore. The curatorial is consists of Paolo De Grandis, Tamara Li (International Association of Art Crities) and Magdalena Gabriel (Future Contemporaries committee member of the Serpentine Galleries) .
Lina Condes has pioneered the use of technology, architecture and biology in her art.  Her research and practice has moved recently towards creating pieces in which technology and architecture are not just the medium; but are positioned centre stage as the art.  The results are powerful works that evoke the sense of bringing the spectator close to the soul of their creator.
For Venice, Lina Condes presents a major new piece of work, ‘Sphinx’. This is an interactive sculpture, the fusion of an active eye on a stylised body that observes its surroundings possibly benignly, possibly malevolently.
The placing of Sphinx, resting resplendent in the historic Palazzo Pisani a Santo Stefano, represents that continuity, science art amid glorious architecture, technology amid history. The Sphinx languishes resplendent, relaxed. It looks out upon the world, radiating energy and light, symbolising an omnipresent creator.
Its vocal reactions are basic, and sometimes base, and their meaning intentionally indistinct. Are they a delighted reaction to what it sees, or a dismissive reaction to the absurdity and futility of our supposed progress? The eye communicates to each of us individually, our reaction to it is not prescribed. Our understanding and emotion to its endless gaze is entirely our own. It has created and now rests, looking on at the bustle surrounding it. It does not judge, we judge ourselves under its stare. It perceives, and simultaneously through its own observations, generates self-perception.
Condes created a site-responsive live performance - an optimistic walking parade by singers specially selected for this exhibition, guided by Daniel Lismore - aiming to raise inner questions of who are we as human beings and what our role is on this planet, as well as a call for collective action to make a world a better place. The exhibition aims to inspire us to look inward, how can we capable of such beautiful dreams but still generate such horrible nightmares. This celestial temple, under the eye’s unremitting stare, resets visitor awareness, encouraging us to denounce the ego and embrace enlightenment through love and peace. Only through such introspection can we counteract the alarming recklessness and destruction of our environment, which we are all responsible for.
Complementing the works, within the otherworldly arena created by Lina Condes, the view is confronted by alien gatekeepers – new works by Daniel Lismore.  Known for living life as a work of art, using his own body as a canvas and wearing elaborate ensembles for this exhibition Lismore created life-sized sculptures. Inspired by Condes concept, Lismore uses new technologies of 3-D scanning – to create renditions of himself from the future, or perhaps from another world. His gatekeepers usher the viewer into a chamber of self-examination, they speak of a future unknown, but one that exists. These future heirlooms give hope to a generation in this time of uncertainty,that a new day will dawn. They act as beacons of hope.
Co-exhisting in this Extraterrestrial Odyseey, the work of Lina Condes and Daniel Lismore use not only modern technology as a way to communicate, instead of traditional mediums of paint & canvas, but have added artistic olfactory elements to communicate on a deeply subliminal platform. In collaboration with Creative Perfumers London, active molecular and botanical constituencies   are released to capture the outward eye of our expansive Univers, whilst cleansing our mind to take the viewer through an inward journey where free thinking is possible. Their work has evolved past the need for gods and myths the subject is their own inner exploration of time and space, today and tomorrow.

About the Artists
Lina Condes was born in Cherkassy, Ukraine in 1988. She lives and works in Miami and Kiev. She received her BA and her Masters in Design (Honors) from the Kyiv National University of Technologies and Design. A former contestant for the Miss Ukraine beauty pageant, Condes has chosen to divert her attention and talents toward contemporary art and design with group projects during Ukrainian Art Week (Kiev), the MAGMART Film Festival (Naples), the Berlin Fashion Film Festival and OPEN, International Exhibition of Sculptures and Installations. Solo presentations of her work have been held at the M17 Contemporary Art Centre (Kiev), SV Gallery (Beirut), and with Avant Gallery (Miami) for the 2016 edition of the SCOPE Art Fair.

Daniel Lismore is a London based artist.  He studied photography before becoming a model and has been shot by some of the world's most famous photographers including Mario Testino, David LaChapelle and Ellen von Unwerth.   He is known for living his life as an art work wearing elaborate and extravagant ensembles that brilliantly combine haute couture with his own creations. Lismore has been named by Vogue as England's most eccentric dresser. His first book Be Yourself, Everyone Else Is Already Taken published by Rizzoli shares the 32 3D sculptures that comprised his first US museum exhibition, co-curated by Savannah College of Art and Design. The sculptures later featured in his second US exhibition 'Theater of Self' at Miami Art Basel. In 2016 he became an ambassador for 'Circuit programme' at The Tate Museum who hosted his first two exhibitions featuring his self portraits in the Tanks at Tate Modern 2012 and Tate Britain in 2013.